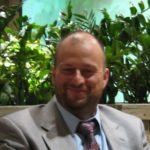 Julian Andreev is a Ph.D. scientist with >15 years of experience in the Biopharmaceutical Industry.  Right after his dissertation research in Dr. Joseph Schlessinger’s lab, he joined newly-formed Molecular Oncology group at EMD Serono Research Institute as Principal Investigator.  At Serono, Julian played a major role into expansion of research activities into oncology drug discovery. Following his tenure at Sanofi Cambridge Research Center, Julian joined New York-based Regeneron Pharmaceuticals, where he established a research group studying mechanisms of intracellular trafficking of therapeutic antibodies and their targets. Julian Andreev received his B.Sc. in Biology and M.Sc. in Biotechnology from Hebrew University, Jerusalem.  After training at Max-Planck Institute for Infection Biology in Tuebingen, Germany, he received his Ph.D. in Pharmacology from New York University, NY in 2000.

We use cookies to ensure that we give you the best experience on our website. If you continue to use this site we will assume that you are happy with it.Ok