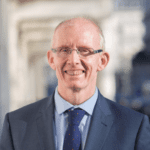 Andrew Livingston (AGL) is studied Chemical Engineering and then worked at an NZ food processing company followed by a PhD at Cambridge UK, and in 1990 joined the Department of Chemical Engineering at Imperial College, serving as HoD 2008-2016. He leads a research group with interests in membranes for molecular separations in liquids and the development of chemical processes using these membranes. Awards include the Junior Moulton Medal, Cremer and Warner Medal, and Underwood Medal of IChemE, and Silver Medal of Royal Academy of Engineering. AGL was elected a Fellow of the Royal Academy of Engineering in 2006.

In 1996, AGL founded Membrane Extraction Technology, a spin-out company which evolved to manufacture solvent stable Organic Solvent Nanofiltration (OSN) membranes for and was acquired by Evonik Industries of Essen, Germany. In 2018 AGL founded Exactmer, a new start-up dedicated to the production of exact polymer molecules including oligonucleotides, peptides and synthetic polymers such as PEG, using Nanostar Sieving technology.

We use cookies to ensure that we give you the best experience on our website. If you continue to use this site we will assume that you are happy with it.Ok